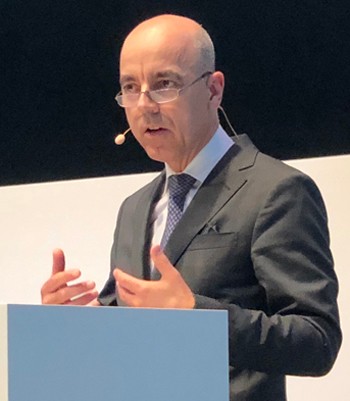 Where: Meeting of the Trustees of the IFRS Foundation, Munich, Germany

Dr Nicolas Peter, Chief Financial Officer of BMW AG, gave the keynote address at a stakeholder event in Munich on 26 June 2019, jointly hosted by the Trustees of the IFRS Foundation and the Deutsche Rechnungslegungs Standards Committee (DRSC, the German accounting standard-setter). In his speech, Dr Peter outlines the importance of IFRS Standards to BMW AG and the global financial market, and discusses some of the challenges for the future.

Ladies and gentlemen, welcome to BMW Group Classic! Thank you for joining us today at this very special place. Here, on this spot, more than a hundred years ago, Bayerische Motoren Werke was born.

Hopefully, some of you already had the chance to view our vehicle collection and take a guided tour through one hundred years of history. It is always a highlight for me, every time!

We will be focusing this evening on an important—and at the same time—very topical subject: the relevance of financial reporting in the global arena. I would like to take this opportunity to offer a few fundamental thoughts.

The IFRS Foundation and DRSC have dedicated themselves to standardisation and harmonisation of regulations—and have certainly had a great deal of success.

Especially faced with growing political and economic volatility in all regions of the world, I believe one thing is clear: uniform accounting standards are more valuable today than ever before. IFRS Standards are a major step towards this goal.

The BMW Group fully supports these efforts, because comparability between multinational companies is one of the fundamental pillars of our globally integrated economic system—and has become an essential requirement for access to financial markets worldwide.

The IASB has been a driving force in this process for more than 45 years and the DRSC has also become a strong voice in Europe in recent years.

It was definitely the right decision for us in 2001 to follow IFRS. In the meantime, it is not just companies across Europe that have adopted IFRS Standards—it has become the global standard, used in more than 160 jurisdictions worldwide.

Even those countries that don’t apply the standards directly, like China, closely follow the rules that the IASB has established over the decades.

The introduction of the new Standards IFRS 9, 15 and 16 in 2018 and 2019, in particular, entailed a lot of effort and expense for many companies. IFRS 9 and 15 were major steps in the right direction, since they consolidated several guidelines and better aligned risk management and accounting.

The introduction of IFRS 16, on the other hand, effectively resulted in the BMW Group simply reporting items on the balance sheet which were previously disclosed in the notes to its financial statements.

Over a period of two years, however a substantial amount of money was spent on personnel and IT costs.

At the same time, despite harmonisation of accounting methods, we are realising that not all reported figures are truly comparable: For instance, we are increasingly seeing earnings adjusted permanently for one-time effects.

Without an accepted reporting standard for these adjustments, there is often no clear answer to the question “What falls under operating business and what does not?”

I can only speak for our company: we do not report adjusted figures. But that also means it is not always possible to compare press releases at first glance. Discussion of alternative performance measures, non-GAAP earnings measures and recommendations for handling non-recurring items must be continued on a more stringent basis.

We have witnessed two fundamental developments in recent years:

In other words, while implementation of new and existing standards in great detail is occupying most of our capacity, public interest is increasingly focused on forward-looking statements.

We saw it once again at this year’s Annual General Meeting: The vast majority of questions about our financial situation from shareholders and investors related to the future.

In this area, in particular, it is essential for companies to retain a degree of freedom in their reporting: High volatility in our environment and the complexities of business management make accurate forecasts increasingly difficult.

The possibilities for standardisation are therefore limited.

Let’s take a brief look into the future.

Non-financial aspects will play an important role in the continued development of reporting. Familiar examples of this are the CSR Directive and the EU Action Plan on Financing Sustainable Growth. The BMW Group is firmly committed to sustainability along the entire value chain.

Transparency in reporting has always been a core value for us. In 2014 we were one of the first companies that had its entire sustainability report audited.

Particularly with non-financial reporting, the informative value varies greatly from one industry to the next. The individual characteristics of each company and their complex value chains must be taken into account here, as well as industry and sector-specific requirements.

When it comes to comparability and implementation within companies, we do not believe “one size fits all” is the right approach. Adequate flexibility is vital for coherent, stringent and appropriately-structured reporting.

Companies with their sights on the future will be willing to share this in their reporting.

In this respect, we must retain the freedom to differentiate ourselves through our reporting.

Standardisation and harmonisation are all about creating a level global playing field, with fair business and competitive conditions for all industries. The IASB, DRSC and companies all have similar interests here.

At European level, we have seen growing efforts by the European Commission in recent years to regulate European companies even more closely. The Commission has considered “EU-IFRS” yet again.

We firmly believe in the benefits of a globally standardised body of rules—which has always been the core idea of IFRS. For that reason, we oppose the concept of special EU-IFRS.

The European Union has delivered economic prosperity. But too much unilateral regulation in one region of the world can seriously disrupt the global balance. This should not be allowed to become a competitive disadvantage for European companies.

In the volatile global political environment in which we currently find ourselves, it is more important than ever to stress the importance of a common regulatory space.

It is easy to forget how far the introduction of common standards has brought us. We now take many of these things for granted.

We are currently experiencing what happens when individual political decisions challenge the international economic fabric that has been woven over decades. The BMW Group has therefore assumed a clear position in favour of globalisation and worldwide harmonisation of rules.