Follow - Feature: Reducing the gap between insurance and other industries ×

Existing accounting practices in the insurance industry are widely perceived as opaque and inconsistent. For companies applying IFRS Standards, the accounting for insurance contracts currently differs significantly from the accounting for other contracts. This diversity poses unnecessary difficulties for potential investors.

This article outlines the similarities between the following key requirements in IFRS 17 and those in other IFRS Standards:

In an insurance contract (or policy), an insurer promises a customer (or policyholder) that the insurer will assume the financial consequences of uncertain future events. The outcome of the contract is uncertain and the profit or loss for the insurer may not be known for years. Such a contract combines the features of a financial instrument and the features of a service contract so that those components are interrelated and cannot easily be accounted for separately.

IFRS 17 requires an insurer to report on the balance sheet its obligations from insurance contracts as the total of:

Measuring the insurer’s obligations at current value is consistent with the requirements in IAS 37 Provisions, Contingent Liabilities and Contingent Assets for provisions and also with those in IFRS 9 Financial Instruments for financial liabilities. For liabilities with characteristics similar to insurance obligations, both IAS 37 and IFRS 9 require measurements based on current estimates of future cash flows.

Recognising profit at the same time services—such as insurance coverage—are provided is consistent with IFRS 15 Revenue from Contracts with Customers. 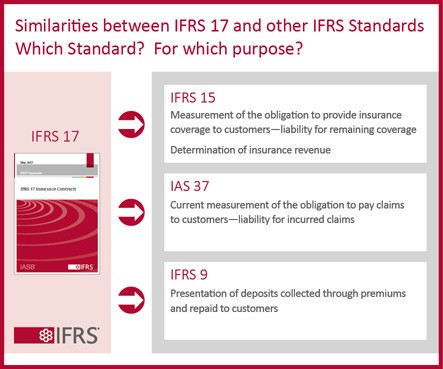 If the amounts the insurer expects to pay for claims, benefits and expenses exceed the amounts the insurer expects to collect from premiums, the contracts are loss making and no contractual service margin is recognised. The shortfall is recognised immediately in profit or loss because the measurement of the insurance contracts should reflect the obligation of the insurer to provide insurance coverage in the future. The amount of that obligation should be at least equal to the fulfilment cash flows. This approach is consistent with the way profits and losses on contracts with customers are recognised in applying IFRS 15.

Insurance obligations (that is, the fulfilment cash flows plus the contractual service margin) can also be regarded as having two components:

IFRS 17, consistent with IFRS 15, requires that the balance sheet reports the insurance obligations and the income statement reports progress towards satisfying the performance obligation in the contracts. In particular:

Deposits collected by an insurer through premiums are amounts that the insurance contract requires the insurer to pay back to the policyholder even if the uncertain future events do not occur.

The obligations to repay deposits to the policyholder, if not included in an insurance contract, would be measured and presented in accordance with IFRS 9. When a deposit is interrelated with the obligation to provide insurance coverage it is measured in accordance with IFRS 17. However, it would not faithfully represent the similarities between financial instruments within the scope of IFRS 9 and deposits embedded in insurance contracts within the scope of IFRS 17 if an insurer were to present the receipts and repayments of such deposits as insurance revenue and incurred claims. Doing so would be equivalent to a bank recognising a deposit as revenue and its repayment as an expense. Accordingly, the requirements in IFRS 17 exclude such deposits from insurance revenue and incurred claims.

In my view, the changes introduced by IFRS 17 will enable a wider range of users to understand insurers’ financial statements and compare them with the financial statements of companies within and outside the insurance industry. As with the revenue in any other industry, insurance revenue will exclude deposits and reflect only the services provided. Apart from facilitating cross-industry comparability, this change will make easier for non-specialist investors to understand insurers’ income statement.

We do not use cookies for advertising, and do not pass any individual data to third parties.

Essential cookies are required for the website to function, and therefore cannot be switched off. They include managing registrations.

We use analytics cookies to generate aggregated information about the usage of our website. This helps guide our content strategy to provide better, more informative content for our users. It also helps us ensure that the website is functioning correctly and that it is available as widely as possible. None of this information can be tracked to individual users.

Preference cookies allow us to offer additional functionality to improve the user experience on the site. Examples include choosing to stay logged in for longer than one session, or following specific content.